A downloadable game for Windows

Zorbus is a free, fantasy-themed, graphical, tile-based, turn-based, role-playing roguelike game. Your goal is to delve deep into a dungeon, find a portal to a mythical place called the Zorbus, where a mere mortal can ascend to demigodhood. You don't have to adventure alone, but can recruit other creatures along the way.

The game tries to create a dungeon which feels alive, eventful and rich in content. Something more than just empty rooms and corridors. Diversely shaped levels with themed content (throne rooms, prisons, hidden treasure caches, etc.) with good connectivity between the areas.

The dungeon denizens act intelligently, fight each other, flee when threatened and try to gather their friends to overcome a threat. Most creatures can use items and can also pick them up from the dungeon floor. Creatures are not silent either, but comment on things with speech bubbles.

The dungeon has dynamic lighting. There are light sources as dungeon furniture and in the hands of creatures and these both can be lit and unlit. Some creatures have darkvision. Creatures react to light and sound.

The game has over 4000 sound effects and over 100 ambient tracks to truly make the dungeon feel alive.

Zorbus is already a stable game, but development still continues with more content and more polishing.

Being a roguelike game, Zorbus creates the dungeon randomly, so that every played game is slightly different. The game uses permadeath, meaning that when a character dies, it really is permanent and the player must begin a new game. You can save the game, but the save file is deleted when loaded. Zorbus does not have item identification or a hunger mechanic.

The rule system for the game is slightly influenced by the d20 system used in the 3rd edition of Dungeons & Dragons. Zorbus has experience levels but no character classes (race is selected). On each level up, you point buy skills and talents (mostly combat maneuvers and spells).

Zorbus needs Windows 7 or newer, but can be run on Linux with Wine and on MacOS with PlayOnMac, WineBottler or CrossOver.

Keybindings are configurable. Mouse control is supported, but is not ideal for playing the game. A game controller can be used. The game has a targeting system, making it very easy to use ranged attacks or talents. Usable items and talents can be assigned to quickslots.

Display size can be configured. You can play in windowed mode or fullscreen and with 32x32-, 48x48- or 64x64-pixel tile graphics or ASCII characters. The font can be changed and text size can be adjusted.

The download button is a link to the homepage (www.zorbus.net), so it always downloads the latest release. If you enable the option "Check for updates on start" from the settings (it's enabled by default), you'll be informed when a new release is available and asked if you want to update. The check is made when the game is started.

Save files are not compatible between releases! You will lose your saved games and previously ascended characters from the save folder!

Looks so interesting, but, there is some bug with controller? I noticed my controller not works always (directional left stick). On controller screen for example, I can see that if I press left stick top up, it shows the point moving up and a "bright" up arc shows, but then when the point reach the limit up, the bright arc disappears but point still there (I mean, it detects, I'm pressing left stick up, but seems like game don't detect this speceficic position as for movement).  Is like there are some positions where stick is detected physically, but not for the game. I hope I explained correctly. I can try to record a video and send it to you if you give me an email or something to share a link with you)

What controller? It's been only tested with XBox wireless controller and Logitech F310.

If you can, send screenshots of controller screen / video to: joonas.hirvonen@pp.inet.fi

Reply
The Porpentine3 days ago

This is really an exciting game.  But I agree with Demnadro re undead. Perhaps you could Create Undead with ghouls, wights and ghasts? And you could equip them, a la skeletons. But not zombies, obviously. Anyway, thank you zorbus - I commend you.

Hi, playing with 64 sized tiles i think there is a bug, my character and other critters often turn invisible, but i still can move, see my healthbar, interact etc.

Also, it runs via WINE, but would you do a native Linux PC version ?

couldn't reproduce the 64 tile problem on Windows. Does it happen immediately after starting a game, or after a while? Have you tried if the 32 / 48 tiles have similar problem? I wonder if this is a Wine thing.

I'm looking into native Linux / Mac builds. Do you know if it's possible to share just executables on Linux, or does it always need to be compiled on the target PC? Do executables on different Linux distributions differ?

Check out AppImage for Linux. They're kinda like .app files for a Mac. I'm using Linux and the game looks very interesting to me. I'm also a developer and I was curious about the way the game is developed (frameworks, libraries, game engines, programming languages). Can I find info on these somewhere?

The game is written in Pascal with Delphi. The only external library I'm using is BASS for sound effects. Graphics are done with just Windows GDI which is barely enough for a game like this.

I just tried to convert my Delphi project to Lazarus which could then compile to Linux and Mac, but can't even get it to a state where it compiles on Windows. I've tried this several times before. I think I'm just going to give up on native Linux and Mac builds.

It's great! Best dungeon crawler I've played other than nethack. I want more stuff though! More dungeon rooms, more varied situations etc. Unfortunately once you've finished it a couple of times it's basically the same after that.

I want to be able to remove my custom pregenerated characters.

Other than that the game is great, currently doing necromancer run and I shall say that he feels currently a lil'... unfinished perhaps?

1) The only undead to make are skeletons or zombies why can't we make at least also these bone snakes.

2) It's annoying to constantly re-equip your warriors.

3) If you enter the new floor you need to kill current and make new undead since your current ones are outdated models.

4) If you have more than 5 skeletons high chances are you will loose some during auto explore.

5) Skeletons are just another pile of bones and zombies just a cannon fodder.

6) The only spell is to create skeletons/zombies.

1) Just give us at least a spell which makes use of animal bones to create these skeletal snakes.

2) I guess we should just bear with it.

3) Your undead progress together with your character?

4) Rework undead companions, what they do when far away, what they do if you remove them from squad, when you make them wait, e.t.c.

5) Abilities for undead? Actually I don't really care about this one.

6) Some spell ideas: (spell which takes uncontrolled undead under your control(welcome back in squad, boney!)), (spell which exercises undead(evil spirit begone!)), (enchant undead (a way to give undead ability or some kind of attribute)).

5 combined with 6 combined with 3) A spell which makes undead which will develop (lvl up, gain skills) and wont go berserk if you leave it alone, but it would sacrifice some spirit points  and/or vitality(why don't give an undead a piece of your soul which will grow inside him, making him unique, almost... alive?).

Thanks for the feedback!

Pregenerated characters (under the "past characters" title) can be deleted by pressing Control + Delete when the menu selector is on a character.

I'll definitely think about your ideas! Actually (2) is already implemented, will be available in the next release.

After trying a whole bunch of roguelikes (including DCSS), this is the one that finally "clicked" for me, and I love it.  The atmosphere created by the sound effects, the tilesets, the AI and the dialogue is great. The game itself plays nice and smooth, with all the usual bits working flawlessly and its own additions fitting in with no issue (e.g. condensing everything down to health and stamina even for mages). I especially liked the various nods to other roguelikes and RPGs, namely the Amulet of Yendor having actual worthwhile stats rather than just being either wearable godmode or an otherwise-useless "you win" object like in several other roguelikes where it appears. Every bit of this game oozes love and dedication put into it, makes me wish I'd heard of it and played it sooner.

Started playing this a couple days ago in release 31, so 32 coming out and adding all these new features today was a pleasant surprise after failing my last attempt at ascension the night before. The sprite bobbing not only looking nice but being customizable is really neat, I left it as is personally but having choices is always good. I also appreciate the quality-of-life features, namely the blue summon healthbars and the info you added to the player handbook at the start (I didn't notice that summon kills gave no XP until I read that bit, whoops).

My first and so far only successful run was today as a gnome mage ("Redingles") with the Natural Leader and Team Spirit perks, coupled with spamming Energy Bolt at the start and then some of the better direct damage spells as I unlocked them. By the end, I was riding a tidal wave of hippo-men and skeletons in plate armor, raining down acid clouds, fireballs, chain lighting and banshee shrieks like nuclear artillery fire  on anything unfortunate enough to have/develop a non-green health bar within view. Ended up ascending by wiping out Mrogna with the above army, some additional figurine/horn summon spam, two elixir clones, hoarded attack wands and a ton of endurance potions to fuel the spellpocalypse. Ended up being a bit overkill, admittedly, but then again so is the process of killing most oversized spiders.

Special mention goes to the fact that you can just drop the starting staff and start punching goblins and kobolds until they explode into gore, provided you have high enough stats plus Health Surge to offset the beating you'll get back at first. Very few games bother to include any consideration for unarmed combat, so having it be a viable gameplay type instead of an unintended dead end is a real treat. Being able to punch everything from common animals/people to ethereal beings until they cease to exist is part of why I played so much Morrowind, after all.

I hope you keep adding more to this game, assuming there's any more room to add anything as it is. Either way, I'm looking forward to punching everything to death solo, one monster at a time, whenever the mood to do another run hits me.

Big thanks for the feedback!

Sure! After all, since I've already gotten 57 hours of enjoyment out of this game (according to the itch client) so far, it's only fair that I let you know that you made something awesome and say thanks.

Belle of the ball this week!  Downloaded a passel of roguelikes . . . a dozen?  This was the best!

Wow!  My goodness this is a tasty roguelike - just loads of flavore.

I really hope this continues!

It is really hard to start with a mage.

This is a really cool game 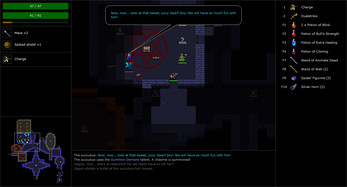 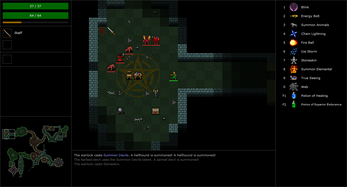 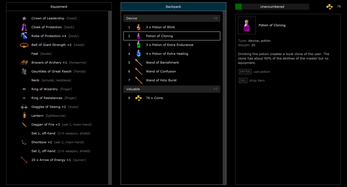 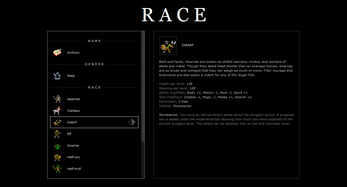 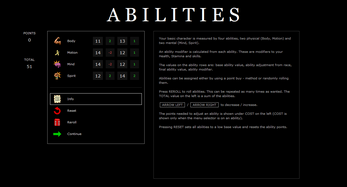 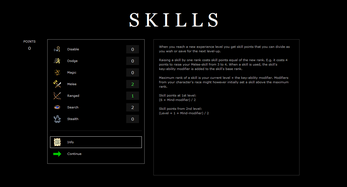 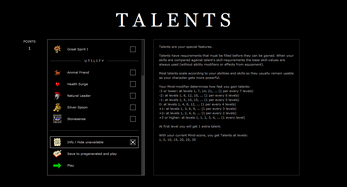 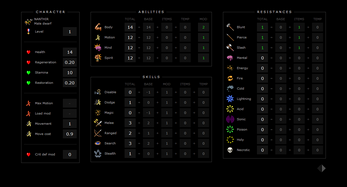 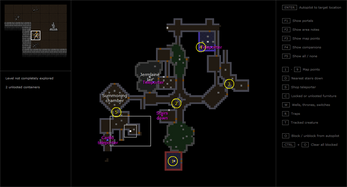 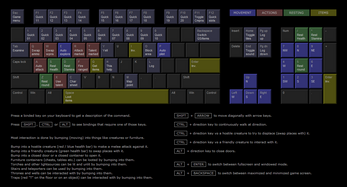 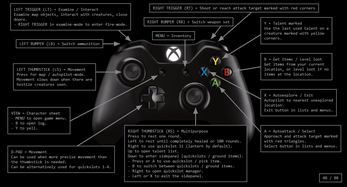